In a previous post (BOSS FW-3 Mods) I told how I did some basic mods to a BOSS FW-3 Wah pedal, which is basically a Cry Baby design with a potentiometer for varying the Q.

For the capacitor that controls the sweep range (C12), I chose a value of 0,022uF, to give the effect a very personal lower sweep range. I found it problematic in some situations, because the effectiveness of the variable band pass filter as a musical device is very dependent on the color of the signal that it encounters at its input. For instance, if I am using the brigde pickup in an already bright sounding guitar (tele or strat), playing high pitch notes, a low frequency sweep will let the sound almost without volume at the low end of the range. The same happens in the opposite situation – high sweep range with dark sounding pickups, or lower notes.

So, in order to have an all terrain wah effect, I have put a switch for alternating between three different values:

Given the behavior of a DPDT on-on-on switch, you can get those three values and their corresponding sweep range values (see https://www.electrosmash.com/crybaby-gcb-95) using three 10nF capacitors, this way:

Other values can be chosen, of course, to obtain more radical or subtle changes. For instance, with 10nF in the center, 56nF at right and 4.7nF on top you get:

The real life device, as built for this project: 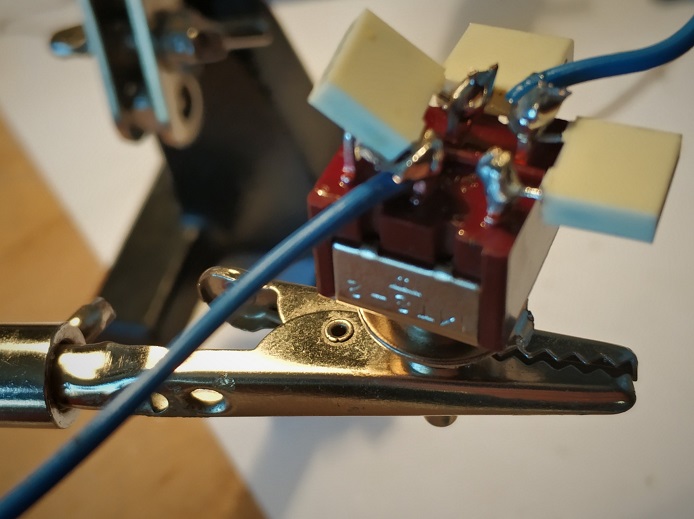 As I mentioned in the previous post (BOSS FW-3 Mods), this pedal, apart from being a tank, has space enough inside for storing all the money I have. In this picture you can see how the DPDT switch fits inside the case:

In the main PCB, the cables from the switch are soldered instead of the original capacitor:

And the final result from the outside (the scratches and dents were already there, they are natural relic as this pedal has more than 20 years): 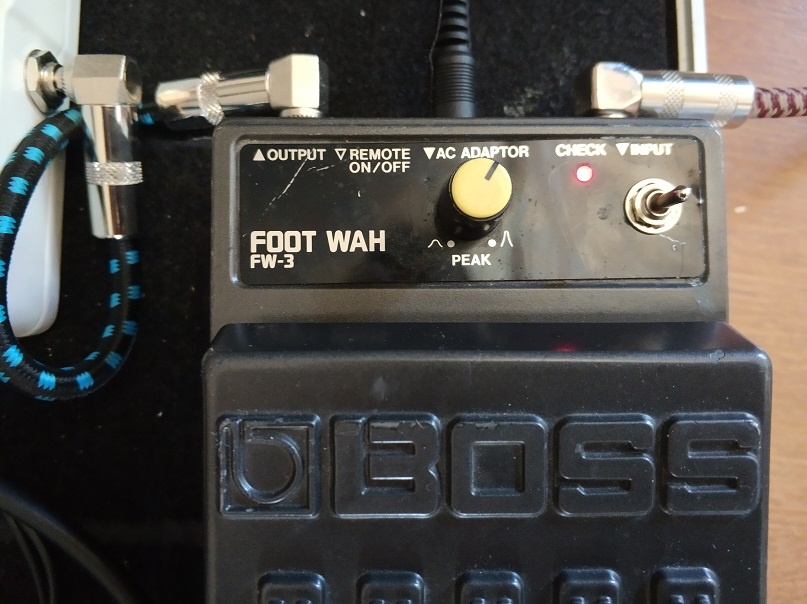 If you have any advice about the execution of the project, or simply have tried it, or in case you had any problem, please let me know in the comments below.

I have a BOSS FW-3 pedal bought in the 90’s when I started to play guitar, looking for a Jimi Hendrix or SRV sound. Why this pedal instead of a Cry Baby or VOX? Because back then you bought what they had in the shop.

Some months ago I decided to sell it because I didn’t like its sound and behavior any more. Too subtle when placed before dirt and too uneven in volume when placed after. But nobody seemed to be attracted to this squared tank in spite of the low price I asked for it, so I kept it.

It is not a bad product compared to other wah pedals, it is just you get sick of the same tone and problems, and want to get a different tone (and problems). In fact I like its size and robustness, it is solid like a tank and fits very well under my feet.

So I decided to tweak it a bit in order to find a different sound, and started to look for possible mods in the web: nothing at all.

After studying its circuit, I found that the BOSS FW-3 wah pedal is essentially a modded Cry Baby. A very clear and in depth analysis of the Dunlop Cry Baby can be found here: https://www.electrosmash.com/crybaby-gcb-95

There is plenty of information about mods for Cry Baby. In many sites they talk about these particular mods, in Cry Baby terminology, for a GCB-95 PCB:

In order to apply this valuable information to modify a FW-3 and find our personal tone, we need to map these components to those found in the BOSS PCB. I didn’t fight with the true bypass mod because I like the BOSS buffer, and it is useful for me in most situations.

See below the pictures for FW-3 pedal PCB. In the top picture I have marked these components in the board. 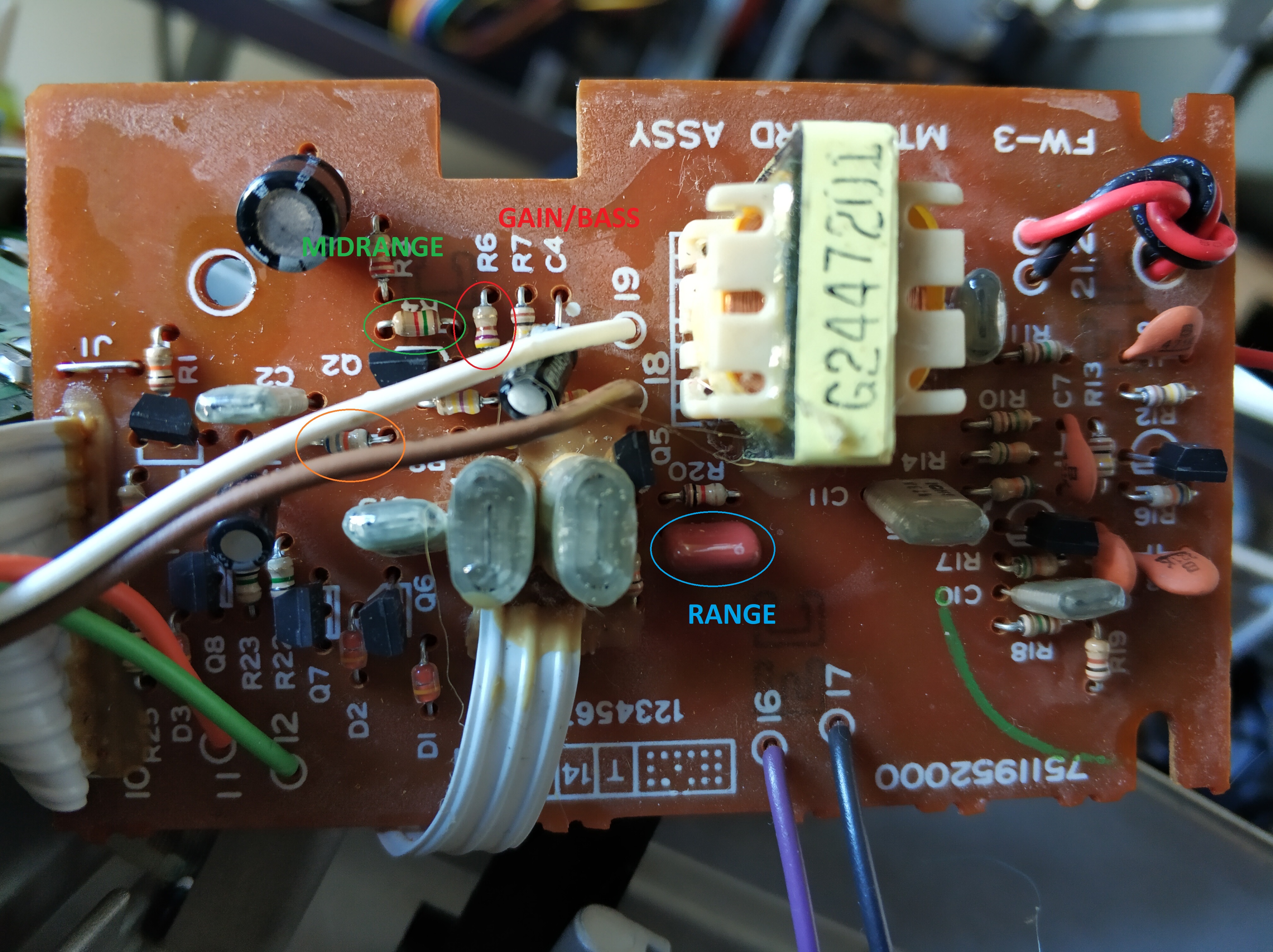 Which values to choose depends a lot on your personal preferences. I have experimented with some values and ended choosing these ones:

These values give a very personal tone to the FW-3 wah. Even placed before dirt, the effect is very pronounced and significantly different from the original, specially in the lower end of the sweep range.

In a next post I will try to record the sound of the modified pedal.

I’m planning to add some pots in the future to regulate the mids and gain, and even a selector to change among different values for C12. The unit has space in the panel to place the pots and enough space inside to place another two PCBs, so I think it is a perfect platform to play around a bit.